The tremor query language, tremor-query or trickle is an interpreted statement-oriented language designed for continuous online structured queries with support for filtering, extraction, transformation and streaming of structured data in a stream or event-based processing system.

At its core, tremor-query supports the definition of windows operators, stream definitions and operations on those streams such as select, operator and script.

The language does not impose schema based constraints on data flowing through the system, although this may produce runtime errors for badly written queries.

The query language interpreter constructs a directed-acyclic-graph or DAG by analysing the dependencies of operators in a user defined query. The input and output streams are then calculated. The DAG model is the same as the pipeline model in previous versions of tremor, but with a rich query language replacing the deprecated tremor yaml format for pipelines.

The language adopts a SQL-like syntax for key statement forms and has a path-like syntax for indexing into records and arrays. The statement-oriented query language prefers nested data-structures to tables and columns from traditional ANSI-ISO SQL as most of the data processed through tremor is structured and JSON-like.

The expression language in trickle is based on tremor-script.

Tremor-query is designed to process unstructured ( but well-formed ) data events. Event data can be JSON, MsgPack or any other form supported by the tremor event processing system.

The SQL-like syntax enables a natural and familiar style whilst allowing the resulting statements to be compiled into a formal DAG for compile-time checks and to ensure correctness.

The addition of aggregate functions, and windowing allows batches or a slice in time of events to be summarised or processed together to derive useful synthetic events.

Like its sibling language tremor-script, tremor-query supports the same data-types and is entirely event-driven. It has many parallels for existing tremor users to leverage while learning, yet it is powerful and flexible in its own right.

The SQL-based nature of tremor-query means that complex branching, combining or powerful constructs such as in-memory tables can be added following a familiar SQL-like syntax.

The expression-based expression language derived from tremor-script allows computational forms to be extended.

The language core is designed for reuse - currently the expression language is reused in the query language, as are the library of functions available to both. The addition of aggregate functions is currently exclusive to tremor-query as these are only relevant when processing multiple in-flight ( or cached ) events at the same time.

In the future, tremor-query may be retargeted as a JIT-compiled language and other domain specific languages may be integrated as the tremor runtime evolves to meet new uses, demands, and stake-holders.

Data ingested into tremor-query is vectorized via SIMD-parallel instructions on x86-64 or other Intel processor architectures supporting ssev3/avx extensions. Processing streams of such event-data incurs some allocation overhead at this time, but these event-bound allocations are being written out of the interpreter.

The current meaning of performant as documented here means that tremor-query is more efficient at processing metrics-like data than the system it replaces ( telegraf / kapacitor / influx ) which do not support rich proactive and reactive back-pressure mechanisms or efficient asynchronous event-based data distribution between system components.

The tremor-query parsing tool-chain has been designed with ease-of-debugging and ease-of-development in mind. It has builtin support for syntax-highlighting on the console with errors annotating highlighted sections of badly written scripts to simplify fixing such scripts.

The tool-chain inherits most of its core capabilities from the tremor-script and pipeline components of the tremor runtime. These components are already in large-scale production use and battle-hardened; this, in turn, minimises any associated risks with introducing a query language, whilst offering a migration path away from the far less expressive and far less easy-to-use yaml-based pipeline configuration which is more error-prone and verbose.

This section details the major components of the tremor-query language.

Comments, Literals, Paths and Expression forms supported in trickle are the same as in tremor-script.

A Query consists of one or many statements separated by ;.

Queries are compiled into a DAG of operator nodes and validated at compile time. At runtime, the resulting executable tremor pipeline is evaluated/interpreted. 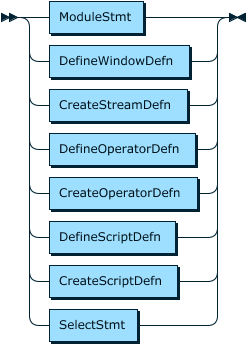 Statements can be one of:

Stream definitions in tremor-query allow private intermediate streams to be named so that they can be used as the source or sinks in other continuous queries.

Window definitions in tremor-query can be either tumbling or sliding.

A tumbling window is a window configured with a fixed non-overlapping interval of time. The window aggregates events once opened, and continues aggregating until it closes. The window can emit synthetic events upon closing. The window reopens for its next cycle when it closes.

Support for sliding windows has not been implemented yet (it has an open RFC and it will be picked up for a future release).

Tremor supports tumbling windows by number of events or by time.

Each select statement maintains the groups for the current windows in an in memory data-structure. This contains the group values as well as the aggregate states. If your grouping values possibly have a very high cardinality it is possible to end up with runaway memory growth, as per default the group data structures won't be evicted as long asd they hold data. To configure an upper bound on the number of groups that should be maintained simultaneously for a window, set max_groups.

Windows based on number of events#

Size based tumbling windows close when a certain number of aggregated events has been reached.

The size increment for each event defaults to 1 but can be customized by the embedded script in the window definition. This script needs to return an unsigned integer denoting the number of events to use for this event. It is possible to ignore the current event by emitting 0.

Windows Based on Time#

Time based tumbling windows close when a certain duration has elapsed. The source for measuring the duration is the ingest timestamp of the events flowing through by default. The provided embedded script can be used to customize the source of time measurement. The embedded script must return a number representing a timestamp in nanoseconds. This way windows using timestamps other than the event ingest time can be built.

Only windows using the event ingest timestamp can be closed when the time in interval is elapsed measured by wall-clock time independent from event flow with a granularity of 100ms. It is thus possible that empty windows are emitted. Windows using scripts to determine the window elapsed time are considered to deviate from wall clock time and will only close and emit when events flow through them.

A select query using one or more windows is generating new synthetic events, aggregated from the events feeded into it. Even if a window only consists of a single event, it needs to be considered a new event. The shape of the new event is determined by the select Target Expression. Those new events will have an empty metadata and the origin uri is pointing to the windowed select query.

The same window can be defined using a timestamp that is extracted from the message instead of the ingest time:

A tumbling window based on number of events that will discard windows when 2 hours have been passed:

Custom operators allow definition, configuration and usage of legacy operators, that have been around before tremor supported the query language. As the query language and deprecated yaml format share the same DAG model and pipeline formats, they are interoperable at runtime and are backwards compatible:

The tremor-script language can be embedded in the query language natively and this mirrors legacy usage (before v0.9) where it was embedded within yaml-based pipeline configuration. However, the tooling that ships with tremor-query understands both the query language and scripting language dialects with better syntax highlighting and error checking built in, for ease of operator productivity over the deprecated yaml syntax.

The select query is a builtin operation that is the workhorse of the tremor-query language. A select query describes from where to where an event should be routed (and under which conditions) and how it is transformed along the way.

Select operations can filter ingested data with the specification of a where clause. The clause forms a predicate check on the inbound events before any further processing takes place. That means the event available to the where clause is the unprocessed inbound event from the input stream (in in this case):

The Target Expression of a select query is used to describe transformations of the event. To pass through the event without changes, just use select event, otherwise you can construct arbitrary literals (numbers, records, arrays, ...), call functions, aggregate functions, reference the event metadata via $ or other Special paths. Nearly everything is possible:

Select operations can filter data being forwarded to other operators with the specification of a having clause. The clause forms a predicate check on outbound synthetic events after any other processing has taken place. That means the event available to the having clause is the result of evaluating the select target clause (the expression between select and from).

Select operations can be windowed by applying a window to the inbound data stream.

In the above operation, we emit a synthetic count every fifteen seconds if at least one event has been witnessed during a 15 second window of time.

To drag event metadata across a windowed query, it needs to be selected into the event payload:

Select operations can be grouped through defining a group by clause.

In the above operation, we partition the ingested events into groups defined by a required event.partition data field on the inbound event. Each of these groups maintains an independent fifteen second tumbling window, and each window upon closing gates outbound synthetic events by a count for that group.

The current implementation of select allows set-based and each-based grouping. These can be composed concatenatively. However cube and rollup based grouping dimensions are not currently supported.

In windowed queries any event related data can only be referenced in those two cases:

Here is an example of valid and invalid references: