It was a pleasant night. I was waiting for LFX to send acceptance/rejection e-mails. And there it was, "Congratulations! You were accepted to CNCF - Tremor" . It was a great and exciting feeling to start this journey! And here I am, at the end of it, writing this blog. It was wonderful, everything that I expected it to be, and even more so in the 3 months! I am writing this blog about my experience in this mentorship.

My name's Prashant (Also known as Pimmy on the internet), a 2nd-year university student pursuing my Bachelor's degree in Information Technology. This blog will talk about my project experience in contributing to Tremor as part of LFX Mentorship Program Spring 2022.

We all hate manual tasks, don't we? No seriously if anyone loves doing things on their own, it's totally fine. Of course not everything can be automated. But in this case, it was something more tedious. Here's a flowchart for basic explanation: 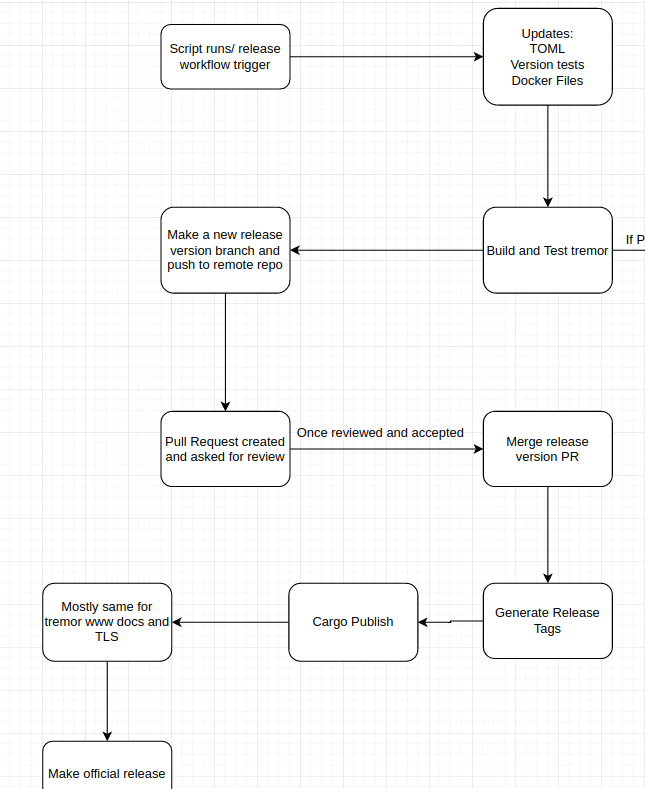 This is how it was done, but manually. Each process had to be checked by someone to ensure a smooth sailing. It was quite the work, and so making a release candidate was never easy.

The first thing was to divide the tasks into smaller sections and work on this. As my mentors at tremor always used to say, make notes! Keep documenting stuff, really helps. These notes helped me divide the tasks of the current CI process into individual sets of goal, and then I started working on it.

Now I did have to test a lot, 400+ workflows just to get this finally done. So I will explain how the release process works.

And that's it for the release!

The Publish crates workflow is now triggered as mentioned in the previous state. There are 4 main crates to be published, and one job to trigger the draft release workflow for tremor-language-server repo (All automated!). Github actions makes it really great to see which job is interconnected.

With all the crates published, including the language-server which follows the exact same process. Tremor has successfully released a new version! Congratulations!

The tremor community has been extremely helpful in guiding me through the entire mentorship. They have this principle of "Never worry, have fun" that will always stay forever with me, and forward in my career. Special mention for Heinz who mentored me throughout the months and helped me. And to the tremor community in general, my thanks to all of them! I didn't know much about github actions or DevOps in general. But now I can confidently say that I can indeed, make processes boring by automating them. I will continue to engage in open source projects, and guide others to the same, cheers!