Skip to main content
This is documentation for Tremor 0.11, which is no longer actively maintained.
For up-to-date documentation, see the latest version (0.12).
Version: 0.11

The tremor-script scripting language is an interpreted expression-oriented language designed for the filtering, extraction, transformation and streaming of structured data in a stream or event-based processing system.

A well-formed JSON document is a legal tremor-script expression.

Tremor-script is designed to process unstructured ( but well-formed ) data events. Event data can be JSON, MsgPack or any other form supported by the tremor event processing system.

The fortran-like syntax allows rich operations to be computed against arbitrary JSON-like data. For example JSON documents can be patched and mergeed with operation and document based templates. Records and Arrays can be iterated over to transform them, merge them with other documents or to extract subsets for further processing

The expression-based nature of tremor-script means that computational forms and any processing is transient. The language describes a set of rules ( expressions ) that process an inbound event document into an outbound documented emitted after evaluation of the script.

The core expression language is designed for reuse in other script-based DSLs and can currently be extended through its modular function subsystem.

The language also supports a pluggable data extraction model allowing base64 encoded, regular expressions and other micro-formats encoded within record fields to be referenced based on their internal structure and for subsets to be mapped accordingly.

In the future, tremor-script may be retargeted as a JIT-compiled language.

Data ingested into tremor-script is vectorized via SIMD-parallel instructions on x86-64 or other Intel processor architectures supporting ssev3/avx extensions. Processing streams of such event-data incurs some allocation overhead at this time, but these event-bound allocations are being written out of the interpreter.

The tremor-script parsing tool-chain has been designed with ease-of-debugging and ease-of-development in mind. It has buitin support for syntax-highlighting on the console with errors annotating highlighted sections of badly written scripts to simplify fixing such scripts.

This section details the major components of the tremor-script language

Comments in tremor-script are single-line comments that begin with a '#' symbol and continue until end of line.

Literal in tremor-script are equivalent to their sibling types supported by the JSON format.

The null literal which represents the absence of a defined value

The stdlib provides useful function for integers in std::integer.

The stdlib provides useful function for floats in std::float.

The language does not support literal character or Unicode code-points at this time.

For strings tremor allows string interpolation, this means embedding code directly into strings to create strings out of them.

To deal with pre formatted strings in tremor script we allow for heredocs they are started by using triple quotes """ that terminate the line (aka """bla isn't legal). Heredocs do not truncate leading indentation, only the first leading linebreak after the leading triple-quote """ stripped.

Since Tremor 0.9 Heredocs also support String Interpolation. A hash sign followed by a curly bracket needs to be escaped \#{ hash signs themselves do not need to be escaped.

Array literals in tremor-script are a comma-delimited set of expressions bracketed by the square brakcets '[' and ']'.

The standard library provides several useful functions to work with arrays in std::array:

Check out the stdlib std::record module for some helpful function for working with records.

Binaries are based on the Erlang bit syntax.

Parts of each field are: <value>:<size>/<type> where both size and type are optional.

The binary types consists of up to three parts. That is 2 prefixes and 1 main type identifier. Examples: unsigned-big-integer, signed-integer, binary. The types currently supported are:

Some examples would be:

We could construct a TCP package this way:

List of binary and unary operators in tremor-script, ordered by precedence (from low to high):

Path-like structures in tremor-script allow referencing local variables, ingested events, event meta-data, script-local state etc. and also indexing into them if they are records or arrays.

Normal paths are used to referring to local variables created with let, but tremor-script offers a set of reserved paths used to refer to commonly needed entities:

Grab the books from the store (the same using key, index and escaped key notation for field lookup):

Grab the title of the 3rd book:

The type of a path is equivalent to the type of the data returned by a path expression. So in the above examples, a reference to a book title would return the value at that path, which in the reference event document is a string.

Path's in tremor-script are themselves expressions in their own right.

Const can be used to define immutable, constant values that get evaluated at compile time. This is more performant then let as all logic can happen at compile time and is helpful for setting up lookup tables or other never changing data structures.

The let expression allows data pointed to by a path to be destructively mutated, and the pointed-to value reassigned. If the path does not yet exist, it will be created in-situ:

Set a local variable a to the literal integer value 10:

Set a local variable a to be the ingested event record

Set the metadata variable a to be the value of the local variable a:

Drop expressions enable short-circuiting the evaluation of a tremor-script when badly formed data is discovered. If no argument is supplied, drop will return the event record. If an argument is supplied, the result of evaluating the expression will be returned. Tremor or other processing tools can process dropped events or data using purpose-built error-handling.

As the content of the dropped event is user-defined, operators can standardise the format of the error emitted on drop from tremor-script

As the content of the emitted event is user-defined, oeprators can standardise the format of the event emitted on emit from tremor-script

By default, if no emit or drop expressions are defined, all expressions in a correctly written tremor-script will be evaluated until completion and the value of the last expression evaluated will be returned as an emit message.

There are times when it is necessary to emit synthetic events from tremor-script within a tremor pipeline to an alternate operator port than the default success route. For example, when data is well-formed but not valid and the data needs to be diverted into an alternate flow. The emit clause can be deployed for this purpose by specifying an optional named port.

Discover if the store.book path is an array, record or scalar structure:

Find all fiction books in the store:

The simplest form of case expression in match expressions is matching a literal value. Values can be any legal tremor-script type and they can be provided as literals, computed values or path references to local variables, metadata or values arriving via events.

It is also possible to perform predicate based matching

These are often referred to informally as tilde expressions and tremor supports a variety of micro-formats that can be used for predicate or test-based matching such as logstash dissect, json, influx, perl-compatible regular expressions.

For example if we had an embedded JSON document in a string, we could test for the value being well-formed json, and extract the contents to a local variable as follows:

A tuple pattern matches a target value if the target is an array and each test matches the positionally correspondent value in the target. The target needs to be at least as long as the pattern but can be longer if the pattern ends with ....

If you are looking for a more set like operation look at the array pattern.

In addition to literal array matching, where the case expression tuple literal must exactly match the target of the match expression one for one, tuple patterns enable testing for matching elements within an array and filtering on the basis of matched elements.

If you are looking for a more array like / positional operation look at the tuple pattern.

In addition to a subset match, where the elements of the pattern must be included in the target of the match expression, array patterns enable testing for matching elements within an array and filtering on the basis of matched elements.

A record pattern matches a target if the target is a record that contains at least all declared keys and the tests for each of the declared key match.

Similarly to record literal matching where the case expression record must exactly match the target of the match expression, record patterns enable testing for matching fields or sub-structures within a record and extracting and elementizing data on the basis of matched predicate tests ( via ~= ).

We can check for the presence of fields:

We can check for the absence of fields:

We can test the values of fields that are present:

We can test for records within records:

We can also test for records within arrays within records tersely through nested pattern matching:

Guard expressions in Match case clauses enable matching data structures to be further filtered based on predicate expressions. For example they can be used to restrict the match to a subset of matching cases where appropriate.

Effectors are the expressions evaluated when a case pattern and guard succeeded. When we have to use multiple expressions to do some more complex processing, we need to separate those expressions with commas ,:

Merge expressions defines a difference against a targetted record and applies that difference to produce a result record. Merge operations in tremor-script follow merge-semantics defined in RFC 7386. 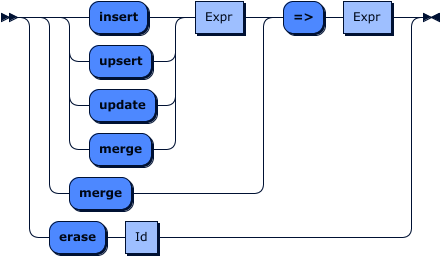 Given our book store example from above:

As part of the tremor pipeline processing, there are times when it's necessary to track state across events over time (eg: in order to exploit stateful algorithms for session tracking, or building and maintaining application state). For this purpose, a tremor pipeline is equipped with operator node-level state management and storage capabilities that persists for the running lifetime of a pipeline deployed into the tremor runtime.

From tremor-script, this shared storage is accessbile via the state keyword, which allows for accessing the storage contents via path expressions, akin to how the event keyword works (with the key difference being that the state storage is shared across events). On pipeline initialization, the state is initialized as null and users are free to set it to arbitrary value over the course of processing.

Here's a tremor-script example demonstrating the usage of the state keyword -- it maintains a counter for the events coming in and emits the count alongside the event:

This will work as part of the runtime::tremor operator confguration in the legacy pipeline yaml setup, and also as an embedded script in the trickle definition of the pipeline.

Since the state storage lives for the lifetime of a pipeline, state will not be persisted when the pipeline is undeployed or the main process is shut down.

The language has pluggable support for a number of microformats with two basic modes of operation that enable predicate tests ( does a particular value match the expected micro-format ) and elementization ( if a value does match a specific micro-format, then extract and elementize accordingly ).

The general form of a supported micro-format is as follows:

Formats can be spread out over multiple lines by adding a \ as a last character of the line. Spaces at the start of the line will be truncated by the lowest number of leading spaces. So if 3 lines respectively have 2, 4, and 7 spaces then 2 spaces are going to be removed from each line leaving 0, 2, and 5 spaces at the start.

The set of supported micro-formats at the time of writing are as follows:

There is no concept of injector in the tremor-script language that is analogous to extractors. Where relevant the language supports functions that support the underlying operation ( such as base64 encoding ) and let expressions can be used for assignments.